This time we dedicate the post to those wishing to train in the field of family sociology. Our group launches 3Edition of the Master Families and Society, a proposed international online training certified by the University of Barcelona, whose purpose is to build a space for knowledge, exchange and debate on issues such as new family forms, the socio-legal conceptualization of families, social construction and its relation to gender.

Our colleague Anna Morero has participated in the monograph donor assisted procreation. Among disputes and redefinitions of links and identities, coordinated by Tina Imaz de la UPV / EHU.

Here's the abstract, and to read the full article you can do here:

“Despite the lack of quantitative data on surrogacy in the Spanish State, Various indicators suggest that this is an increasingly common way to access maternity and paternity. This article explores the main characteristics of the Spanish families created through surrogacy in countries around the world. For this primary data obtained from the application of the survey will be provided EMirrors, which aims to deepen knowledge about the processes of surrogacy that Spanish people, both in pairs and individually, They perform to create their families. Specifically, the results presented here provide a demographic profile of the mothers and fathers of intent Spanish, but also they show the motivations that led them to choose surrogacy, and the main features of these processes.“

Last 3 October we were invited by the Col·School of Psychology to participate in the round table “surrogacy. We approach the complexity interdisciplinary: ethics, sociology, law and psychology“, from an interdisciplinary look where we discussed the need for regulation, paper market or the impact of surrogacy in public policy.

Of the 4 al 7 of September, our colleague Rosa Ortiz, He participated in the IV International Congress of Anthropology AIBR presenting a communication on our R & D project. Communication is the result of collaboration between two lines of research that perform three investigadorx that are part of the research group dome.

We leave the abstract communication, that soon it will be published in an article.

care, reproduction and neoliberal globalization. An approach on the linkages between global care chains and surrogacy

Summary:
Surrogacy is often referred to as a form of transnational motherhood in cooperating people from different geographical locations and, often, also of social classes and different ethnicities. Global care chains are also considered a transnational form of motherhood made up of women from countries of the global South who perform care work for people, usually, higher social class and ethnicity in different countries of the Global North. This communication aims to explore the commonalities of two highly present phenomena in Spanish society: surrogacy and global care chains, and those factors that make them possible: globalization and casualization of care-related functions. For it, first, the topic will be addressed from an intersectional perspective, which will show the multiple inequalities that take advantage globally to ensure the processes of reproduction and care in countries of the Global North. Secondly, Empirical results from the survey designed under the project will be presented R & D “Surrogate motherhood: family transformations in the XXI century Spain“. Specifically, the results of the survey show the desigualadades that can operate in practice will be presented.

While we continue to work with the data obtained in the program, we continue attending discussion forums that allow us to link our research with debates and social thought. From recently we have been able to work with Grade students of Law, University of Barcelona, where we could also discuss with Dr.. Monica Navarro Michel, professor of civil derecho y miembro del grupo Observatory of Bioethics and Law of the UB, on the need to regulate surrogacy in the Spanish State. 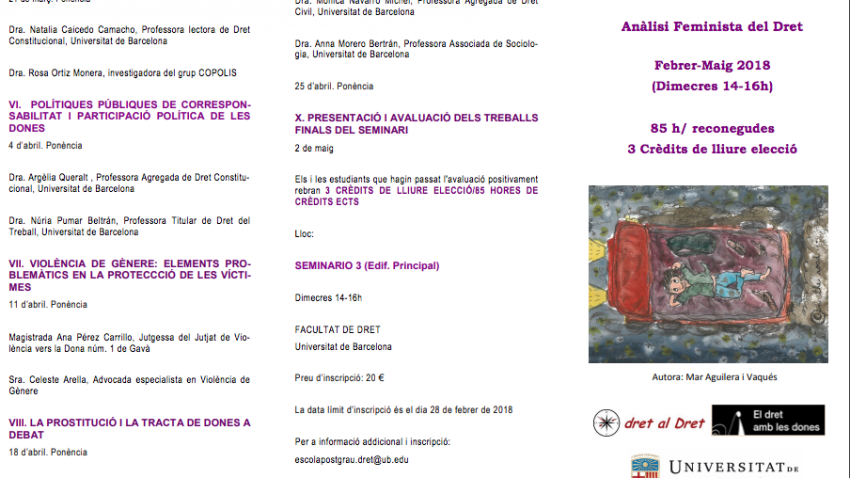 Last Saturday 28 of April, We also had the opportunity to be part of the panel discussion “Techno-breeding: surrogacy and right of all assisted reproduction” where he also participated attorney Laia Serra and Anna Ponces. Panel discussion that was part of the conference “Feminist Debate International Conference for the Right to the body, organizing the ONG It Cooperacció in Barcelona. 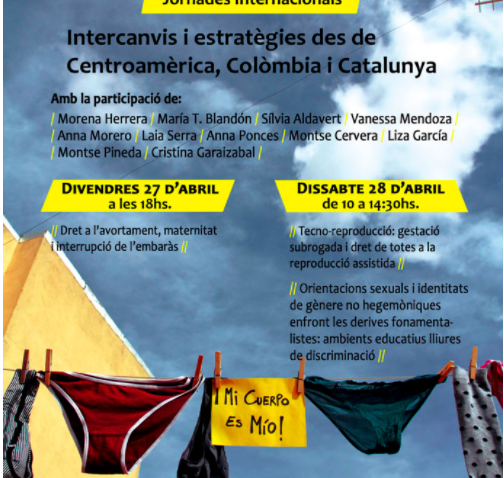 Last Saturday 2 December we were in Madrid to share some of the preliminary results of the research we are carrying out. Although we are in the final phase of data collection through survey, pe can start pointing timid trends in surrogacy processes developed by Spanish people in different parts of the world, among which the United States and Ukraine.

Special thanks to the company are our children by supporting research.

Last 13 November closed the first phase of the survey Emirrors, the first survey of families consisting of surrogacy in the Spanish State. This first phase has gone well and we are very happy with the response it has received the survey. Currently, we are in the process of analysis, debugged data and extracting key information that soon we will share. This first pilot has also helped us to make some adjustments in the data collection instrument.

Today, day 12 December we opened a second phase of collecting information we want to help us to expand our sample so that we can provide a picture as complete as possible of the characteristics of families surrogacy. The survey will remain open in the coming months (we will inform you of the date of closing when it gets closer).

We invite you to participate to all those who were unable to participate in the first phase. Likewise, We ask your cooperation in the dissemination of the survey. We hope that this second phase allows to increase our sample and, as we mentioned above, also serve to further refine the data collection instrument, whose vocation is to serve to continue radiographing the reality of families and their evolution.

We continue with the analysis of the first round and started enthusiastically the new phase of the survey Emirrors.

If you did not answer the survey above, do not hesitate and participate in the new phase that begins today.

Thank you very much to all and all in advance for your valuable cooperation.

Last 12 September from the project were launching the first survey Mirrors families formed through surrogacy in the Spanish State. We almost two months with an intense outreach through social networks, email and other means in order to go by publicizing the survey and to involve families. We have been also explaining what the topics that were delving were and we have shared some specific issues that were included in the questionnaire.

We want to thank everyone who participated in the research by completing the survey and also to all who have contributed to its spread.

We inform you that this first phase will end next survey 13 OF NOVEMBER. At that moment, We collect and analyze all surveys completed so far, but can follow answering because it will open new responses will be incorporated into a second phase of analysis.

Thus, we ask your cooperation to give a final boost to the dissemination of this first phase so we can have the greatest number of responses. Those who have not yet answered, we invite you to do so 13 November and those who have left the survey half, We remind them that they can continue cumplimentándola from the same electronic device.

To all, Thank you very much for your collaboration.

We continue to report,

This survey is part of an R & D project funded by the Ministry of Economy and Competitiveness for the period 2014-2017, with the aim of deepening the analysis of the challenges and changes that surrogacy is introducing in the current Spanish society.

If you want to participate in the project directly answering the survey click here or follow this link https://es.surveymonkey.com/r/E-MIRRORS_2016. The estimated time for completion is approximately 30 minutes.

In this leaflet you will find more information about the survey, Feel free to spread the word! The collaboration of people who have created their families through surrogacy is essential, You can help us by answering the survey and dissemination by others who may be interested.

For any queries, You can contact us through this email: themirrorsproject@gmail.com and remember that you can also follow us on twitter and our web @Mirrors_Proj: www.mirrorsproject.es
We still!

Anna Morero Beltrán, coordinadora de Mirrors Project, He has participated in several academic forums during the months of June and July 2016 making known the R & D project "Surrogate Motherhood: family transformations in the XXI century Spain” (CSO2014 55556P). With this research project we intend to conduct a sociological approach to surrogacy in the Spanish State, for analysis using the main conceptual and theoretical tools developed so far. Both appointments have assumed highest academic level spaces in which we could contextualize the phenomenon, feeding the theoretical and methodological reflection and disseminate the first research advances, mainly the online survey we are about to launch.

Specific, at XII Spanish Congress of Sociology held in Gijón day 30 of June, 1 Y 2 of July, our colleague has been sharing our work in the group Family Sociology with a Communication surrogacy: family transformations in the Spanish State. attached, then, the summary of the submission:

“Surrogacy is an increasingly common way to access maternity and paternity in the Spanish State, according to some sources during the year 2014 about 1400 children born through surrogacy in countries as diverse as USA, Russia, Canada or Mexico, according to these data 85% mothers and fathers of intent were heterosexual while the 15% They are gay, nevertheless little is known about these families.

Copolis the Interuniversity Group "Welfare, Social Control", It is developing R & D project "Surrogate Motherhood: family transformations in the Spain of the century " (CSO2014 55556P) which it aims to deepen the knowledge of families who use this technique of assisted reproduction and the social impact that these families have in the context of the current diversity. The initial phase of the project involved the design of a survey on Maternal and Family Diversity Subrogation (ESUDIF) families formed through surrogacy in the Spanish State, in this communication we will introduce the key factors of the survey and design”

On the other hand, at 3rd ISA Forum of Sociology, held in Vienna (Austria) between days 10 Y 14 July 2016, our colleague presented at the Roundtable 2: Gender Issues Across the Globe la comunicación titulada Gestational Surrogacy in Spain: Parental Transformations in the XXI Century in Spain. We attach the abstract communication.

“Gestational surrogacy is an increasingly way to access to motherhood and parenthood. This paper deepens, from a feminist approach, on the questions that surrogacy raises about two key concepts of Western society: motherhood and family.
First, gestational surrogacy challenges the concept of “motherhood” as socially has been constructed and accepted, since it separates the roles of gestational motherhood, social motherhood and genetic motherhood. It also raises a challenge to the existing heteronormative ideals about motherhood the way that traditionally has been understood. The surrogate, rejects social motherhood, leaving the care of the baby to someone else, therefore, she rejects the ideals that place women as primary caregivers (Friend, 2010).
Secondly, surrogacy also states that family becomes a social construction and not a natural product. Through surrogacy, family happens to be created through the market, being no longer a question of destiny but becoming a choice.
Finally, although the Spanish law on human assisted reproduction does not allow surrogacy, since more than twenty years ago Spaniards have been creating families through it. This paper will also give some outputs about the general situation of surrogacy in Spain and its implications. This paper is part of an I+D research project (CSO201455556P) which holds the first survey about the topic, primary data from this survey about the sociodemographic profile of families created through surrogacy as well as about their experience will be presented”.

My Tweets
Project of:

Funded project in the call for R & D projects 2014 the Ministry of Research, Development and Innovation of the Ministry of Economy and Competitiveness under the name: "Mother Surrogacy. Parental transformations in the XXI century Spain CSO2014- 55556-P (2014-2017)