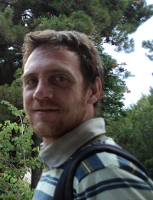 He studied Sociology at the University of Crete and holds an M.A. degree in Social Anthropology from Panteion University, Athens.

During his M.A. studies he conducted systematic fieldwork at the weekly bazaar of Piraeus, Athens’ main port, where he examined the various effects that the ongoing economic crisis has on the everyday economic activities of  economically disadvantaged social groups. His research focused on labour relations, consumption practices and their interconnection with household economy and family ties. Special attention was given to the so called “informal” economic activities as well as to the links between the formal and the informal economy.

Stamatis’s current project is entitled “Authoritative Economic Models, Everyday Struggles and Grassroots Responses to the Crisis in a Greek County Town”. It aims to assess the ongoing neoliberalization of the Greek economy on a social basis and to  trace new social and economic dynamics that evolve in the Greek crisis context.