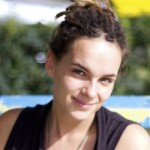 Carmen Leidereiter defended her thesis at the University of Amsterdam in December 2019. Carmen’s PhD project at the Amsterdam Institute for Social Science Research (AISSR) engaged the reconfigurations of everyday economic household practices and moralities. The ‘economy of crisis’ is understood as a breakdown in continuity that may open new perspectives and pathways – labour, provisioning, collective bargaining – while also limiting peoples’ abilities to imagine the future as prosperous social reproduction. The investigation of household behaviours and the moralities which guide these may contribute to an articulation of the rationalities of everyday economic choices.

Carmen Leidereiter studied Sociology, International Relations and Anthropology at University College Roosevelt in Middelburg, the Netherlands. She holds an MA degree in Sociology and Social Anthropology from Central European University in Budapest, Hungary, where she received a CEU fellowship award. During her undergraduate study, she was a visiting student at the faculty of Humanities at University Pretoria. Her previous work investigated the Mozambican “food riots” of 2010 vis-à-vis media representations of the events. She focused on the centrality of (bread) consumption to identity formation and socio-historical memories of socialism in the two urban centres of the country.

Her MA recent research considered the provisioning topology of largely self-sufficient farming communities in the southern Algarve alongside the morality that simultaneously constrains and enables such endeavours. The contribution of this work lies in capturing the inevitable gap between what is attempted and what is achieved by understanding “the will to autonomy” as a discursive catharsis of incoherent and oftentimes ideologically contradictory, economic practices of everyday provisioning struggles.

Taking impulse from her research interests, Carmen has spent several years working in collectives and self-organized farms throughout Europe and South East Asia. She also participates in several environmental and educational platforms, as well as civil society groups, such as the Gili Islands Eco Trust, Seeds of Change Learning Centre, Food Not Bombs and the Berliner Volksküche Gardens.