In Reggio Emilia we visited the neighbourhood of Santa Croce, an old part of town that was initially destined to the workers of the metal-mechanic Reggiane industries.

The area has of late been almost completely abandoned by its old inhabitants while a highly ethnified population of immigrants appears to have recently replaced them. While we were walking in Santa Croce, during a foggy Sunday morning, several vans of the evangelic churches were collecting (mainly west african) immigrants to bring them to the Sunday liturgy. 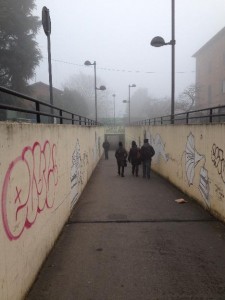 Different groups seem to occupy different areas, and the neighbourhood has itself become a sort of “enclave”, since a branch of the railway cut it out from the rest of the town center. The only way to accede to Santa Croce from downtown is through this passage below the railway, which has acquired the reputation of being “dangerous”, so – we are told – almost nobody ventures down here any longer. 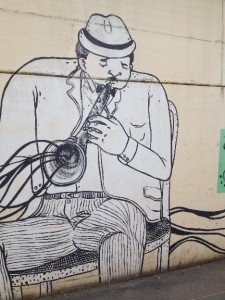 Maffia, an old independent squat that was known way outside Reggio Emilia for its lively nightlife, refined rock music, and cultural activity, has closed down a few years ago. Nevertheless, a strong alternative culture seems to remain important in the neighbourhood, as testified by the numerous graffiti that celebrate both the spirit of music and immigrant cultures. 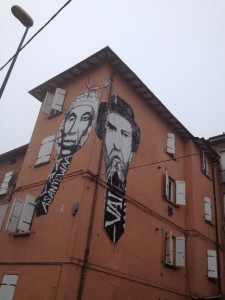