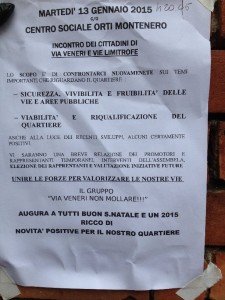 There is, both in Reggio and Santa Croce, a general tendency towards social activism ‘from below’. Young people we met had organised into an association meant to facilitate the integration of foreigners in social life. Older people have created neighbourhood committees. It is interesting to see how in a flyer we saw a meeting is called to organise strategies to maintain “security, liveability, and accessibility of public areas” and to guarantee “traffic functionality and a regeneration of the neighbourhood”. These appear as attempts for privates to step in and to maintain social and physical control of a neighbourhood, where the state clearly doesn’t carry out that function any more.

In more general terms, “The people” and other more or less institutionalised collective actors (unions, associations, informal groups) call themselves in, by appropriating a surreptitiously neo-liberal narrative inviting associations of individuals to undertake the different functions of a disintegrating welfare state. This move is of course endorsed by the institutional order, which happily supports such a replacement. For example: an informant (advertisement agent)  tells us about this campaign of public advertisement she has conceived and worked in, called “Reggio people, for example”.

The campaign, promoted and supported by the City Hall, is meant, in her words, “to show the Reggio people they are able to do so many things by themselves, i.e.: there is no public money any more, so let’s convince them to organise and do by voluntary work what the public sector is not able to do by itself”.

In this sense, it seems that in an area like Reggio Emilia, which —as underlined by many informants— has a tradition of radical democracy and anti-liberal activism, a counter-hegemonic narrative of social engagement and collective mobilisation has surreptitiously been penetrated by the fundamentally neo-liberal discourse of  self-sustainability and autonomy from state intervention.