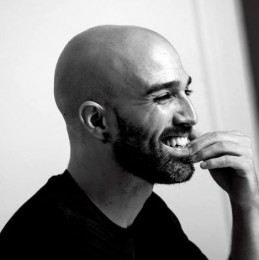 Dr. Jose Valenzuela is an Electronic and Automatics engineer, and has a Master’s in Biomedical Engineering, an MBA, and a Master’s in Literary Creation. He received his PhD degree from the University Pompeu Fabra in 2016, under the supervision of Dr. Domingo Ródenas. He has worked as a lab engineer at the Nanomaterial and Microsystems Group (UAB), at the Cognitive Neuroscience Research Group (Brainlab, UB), and at the Virtual Reality and Neuroscience Group (EventLab, UB). He has also worked as an Innovation Project Manager at Vall d’Hebron University Hospital, as a Creative Producer at Visyon, and he currently writes for several cultural media as Jot Down Magazine, CCCB Lab, or Revista Mercurio.

During his PhD studies in Humanities, he investigated cognitive mechanisms that prompt an emotional response in readers during their transportation to narrative universes. Based on aesthetics reception theories, possible worlds theory and emotions science, a theoretical study was done about mechanisms that regulate disbelief suspension during the fictional transportation process.

His research interests focus on the intersection between Humanities and Science, and more precisely on perception, imagination, and the way we create and perceive fictional worlds in literature, virtual environments, cinema, mental diseases, and even in interpreting the real world.

He joined again the Brainlab as a predoctoral researcher (yes, he is voluntarily doing a second PhD) under the Artsoundscapes project to research the neuroscience and psychoacoustics of rock art landscapes. The aim of his main tasks within this ERC project was to examine the sensations and emotions evoked in people by sounds and how they relate to auditory interpretations and physically measurable quantities; to explore auditory perceptions such as echolocation and the augmented audibility using techniques from audio engineering to virtual reality and neuroscience measurements.

However, since 2020 he became the EEG and Evoked Potentials Lab Manager and changed the topic of his PhD to neuroscience and artificial intelligence working with Python and Matlab in machine learning methods to analyze EEG data. He aims at discovering the use of new neurodevelopment biomarkers in newborns and infants that could help find ways to reduce the effects of any impairment in the auditory system.