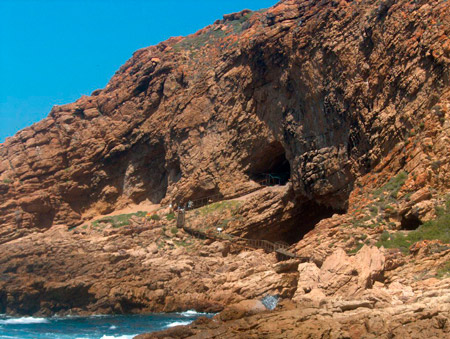 The study at the sites of Pinnacle Point (Mossel Bay, South Africa) is chronologically framed at the time of the appearance of the first Homo sapiens. This archaeological complex includes around 50 caves and shelters located on the South African central coast and with evidence of human occupation. Our study at the Pinnacle Point site is part of the SACP4 project. This project is focused on the reconstruction of the paleoenvironment and the paleovegetation at a time when conditions of environmental degradation would exist during the MIS 6 (195-135 ka) climatic period and that would have made a good part of the African landscape uninhabitable, leaving a series of habitable redoubts as it would be the south coast of South Africa. The vegetation and landscape studies carried out in this area follow the same protocol as in the Olduvai Gorge, that is, the study and description of modern biomes that serve as comparative elements with the results obtained from the archaeological study. Also within this same geographical area but in the Pondoland region, further east, we have initiated a new study of the vegetation that is part of the Pondoland Paleoclimate project, Paleoenvironment, Paleoecology and Paleoanthropology Project (P5) led by E. Fisher (Arizona State University).