Early Islamic ceramics and culture in Tunisia: chronologies, sources and vessel use 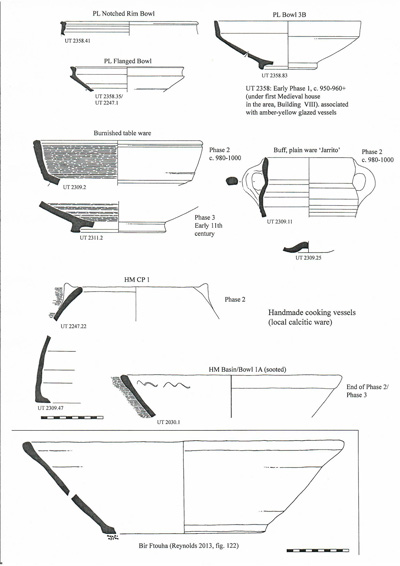 Some 250 ceramic samples have been collected from the four phases of Islamic contexts excavated at Utica for archaeometric analyses (petrological and especially chemical) of the fabrics of Islamic transport amphorae, plain wares and glazed wares to determine their relationship and sources: the identification of possible local products through comparison with samples from the early Imperial Roman pottery workshops excavated in Utica; imports from elsewhere in Tunisia, especially the region of Kairouan/Raqqada/Sabra al-Mansuriyya, the likely source of most of the glazed wares, plain ware bowls, mortars and jugs, but also another unknown Tunisian source (large carinated bowl in a dense dark red fabric and well burnished surfaces, which surely served in lieu of glazed examples for serving food); and possible sources in Sicily. In the latter case, the possible Sicilian source of amphorae and perhaps some of the plain forms is a key question. A grant has been kindly awarded by the Barakat Trust (Oxford) (May 2019) in support of this work which began in October 2019.

As part of this project, a number of glazed samples from the site of Bir Ftouha (east of Carthage) which had been previously published (Reynolds 2013) were analysed to determine the nature of the glazes and stages of manufacture (Pradell et al. 2021). Though it has always been said that tin was already used in Fatimid Tunisia in the 10th century to provide a white background for the typical red, green and brown colours of some glazed vessels, the analyses by Trinitat Pradell and Elena Salinas have demonstrated that this was obtained not by applying tin, but from a layer of ground quartz. As a continuation of this work, samples of c. 25 glazed vessels from the Utica sequences have been taken in order to analyse their composition. The range of glazes here is wider. Phase 1 (c. 950-980) is marked by the presence of a distinctive well-made amber yellow glazed ware with brown and green additional colouring, some examples bearing the words al mulk across the centre of the floor. Though this ware recalls the giallo di Palermo glazed ware, the latter is in theory earlier in date (late 9th-first half of the 10th century) and appears to have a different fabric (Ardizzone, Pezzini and Sacco 2014). The similarity of this Palermo glazed ware to those from 9th century Aghlabid Raqqada is equally evident and is perhaps not coincidental.

In Utica rather unevenly potted, well fired, small carinated bowls (Phases 1 and 2) bearing amber yellow glaze (e.g. the vessel photographed with a lotus flower in brown on the floor) may be from the same source as examples in Bir Ftouha but are perhaps earlier products (in the ‘orbit’ of Raqqada?), whereas a bluish-green glaze (at times almost turquoise) is typical from the late 10th to mid-11th century phases at Utica, in a highly calcareous quartz-rich pale green-yellow or white fabric that may originate in or near contemporary Sabra al-Mansuriyya. These blue-green glazes were not a feature of the Bir Ftouha assemblage, whereas vessels in a similar fabric but with poorly adhering pale straw-yellow glaze were typical and seem less common in Utica. There is clearly here a great opportunity to investigate and better define the complex evolution of glazed wares in Kairouan, in Aghlabid (876-908) then Fatimid Raqqada (909-921), in the port of Mahdia (the second Fatimid capital, 921-948) and Sabra (the third Fatimid capital, 948-973), both in terms of glaze composition, production techniques and possible differences in the clay bodies that only archaeometry may detect.

Vessel use is also of major interest. Samples have therefore been taken for the analysis of possible traces of organic residues determining the content and use of the amphorae (wine?) and a handled deep bowl or jar form for liquids (milk products?) which is a regular component in Islamic contexts in Tunisia (e.g. Bir Ftouha, Oudna) and across the Maghreb and in al-Andalus (called jarritos in Spanish contexts). The chemical analyses are currently underway at the ERAAUB. The petrology will be carried out by Claudio Capelli (Università di Genova), who, apart from his many years of research defining Roman ceramic fabrics in Tunisia, Libya, Algeria and Sicily, has been aptly working on the petrology of Islamic pottery from excavations in Sabra al-Mansuriyya and sites in Sicily (including Palermo). It is hoped to correlate the results of the chemical analyses from Utica with those on the Sabra al-Mansuriyya and Palermo assemblages that have been carried out by Yona Waksman in Lyon (Laboratoire ARAR, Maison de l’Orient et de la Méditerranée).