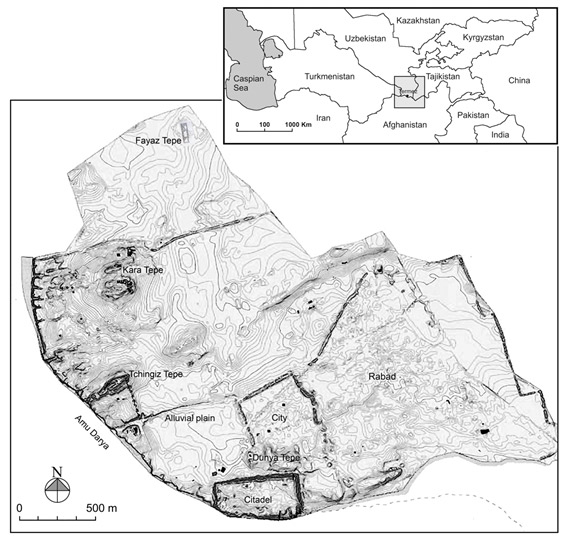 Since 2006 some members of the ERAAUB team conduct important archaeological research at the emblematic site of ancient Termez (southern Uzbekistan), located on the right bank of the Amu Darya (ancient Oxus River) (Fig. 1). Its strategic position, controlling the point where it is easier to cross the river, and at the confluence with the Surkhan Darya, gave the site a crucial political and military role. Moreover, the city was located along one of the most important routes of the Silk Road, connecting Samarqand and Bukhara to the north with Balkh to the south, and from there to the Indian subcontinent.

All the historical data currently available on Termez come from written sources of various origins and from the archaeological excavations conducted at the site. Archaeological work in ancient Termez began in the early twentieth century. A first scientific survey was conducted in 1926-28 by B.P. Denike of the Museum of Eastern Cultures of Moscow, while the first archaeological excavations started in 1936 and under the direction of M.E. Masson of the University of Tashkent. Since 1979, the archaeological works have been directed by Dr S.R. Pidaev and since the 1990s several international collaborative programs with foreign archaeological teams have been undertaken under the supervision of the Academy of Sciences of the Republic of Uzbekistan. The current Mission Archéologique Franco-Ouzbèque de Bactriane Septentrionale (MAFOuz-Bactriane) directed by P. Leriche and S.R. Pidaev began work in 1993 in the Citadel and Tchingiz Tepe enclosures and in the lower town of Termez (Fig. 1) (Leriche 2001, 2010, 2013; Leriche and Pidaev 2007). Since 1998, the Japan-Uzbek Joint Research Team, headed by K. Kato and S.R. Pidaev, has conducted archaeological excavations on the north and central hills of the Buddhist monastery of Kara Tepe (Pidaev and Kato 2010). Since 2006 the Uzbek-Spanish mission, the International Pluridisciplinary Archaeological Expedition to Bactria (IPAEB) led by J.M. Gurt and S.R. Pidaev, has been working in Tchingiz Tepe, in Kara Tepe, in the alluvial plain, in the shahristan and in the rabad (Gurt et al., 2006, 2007, 2008, 2010, 2015; Gurt and Pidaev, 2009, 2010; Gurt and Ariño, 2011; Martínez et al., 2014, 2019a, 2019b; Tsantini et al., 2016).

The ancient city comprises various settlements that are the result of continuous occupation from the Hellenistic-Seleucid to the Islamic periods (Fig. 1). Archaeological excavations conducted at the site have provided clear evidence of the earliest settlement at Termez, which consisted of a fortified rectangular enclosure (Citadel) erected over a small hill overlooking the Amu Darya, and two monumental constructions associated with worship (Buildings A and B). The architectural elements and artefacts in Greek style found at Termez have led archaeologists to recognize it as one of the great centres of northern Bactria during the Seleucid (late 4th and first half of the 3rd century BC) and Greco-Bactrian (second half of the 3rd century until mid-second century BC) periods.

The invasion by the nomadic tribes generically known by the name Yuezhi at mid- or late 2nd century BC brought the Greek kingdom of Bactria to an end. The presence of these tribes in Termez has been detected in the Citadel, in the Tchingiz Tepe and in the alluvial plain, near the ancient canal built to transport water from the Surkhan Darya to the Amu Darya. Termez likely was one of the capitals of the Yuezhi although there is no agreement on which one exactly; some scholars suggest Tumi, and others Ghian-chi.

Under the Kushan kings, from the 1st century AD and until the Sassanian invasions at mid-3rd century AD, Termez remained a major urban and Buddhist religious centre coinciding with a period of political stability that has been called the Pax Kushana. Besides the urban and artistic development of the city, several monastic Buddhist complexes —i.e., Kara Tepe, Fayaz Tepe, Tchingiz Tepe, Zurmala— and man-made caves identified as monastic cells have were built at various locations within the urban area.

In the mid-3rd century AD the Kushan kingdom became a vassal state of the Sasanian Empire, and this date marks the end of Buddhist occupation at Termez. In the centuries before the Islamic occupation, the region of Bactria–Tokharistan was under constant pressure from various nomadic peoples, Chionites or Huns, who established themselves as autonomous entities and threatened the political stability of the Sasanian monarchy and finally founded the Kidarite state in the second half of the 4th century AD.

Since the Arab conquest in the late 7th century CE, ancient Termez was part of the region of Transoxiana. In the 9th–10th centuries, under the Samanid dynasty, the city greatly developed and prospered, reaching the remarkable extension of 500 ha. It consisted of three fortified areas, each one with its corresponding wall: the citadel located on a rectangular mound along the river bank, the proper city or shahristan, densely inhabited, and the suburbs, or rabad, occupy the larger area of the city, lying east and north-east of both citadel and shahristan; markets, caravanserais, and manufacturing workshops concentrated in the rabad, being the centre of the economic life. After the fall of the Samanids, between the 11th and the early 13th century, ancient Termez was contested between several Central Asian dynasties (i.e, Kharakanids, Ghaznavids, Seljuqs, Kara Khitays, Ghurids and the Khwarazm Shas), who alternatively controlled this powerful stronghold. In 1220 the Mongols of Genghis Khan took and largely destroyed ancient Termez. Nonetheless, the city was able to recover afterwards, as testified by several archaeological finds, both structures and materials, dated from the 13th until the 17th/18th century.

The archaeological research carried out by the ERAAUB at Termez has been performed in the framework of the ‘International Pluridisciplinary Archaeological Expedition to Bactria’ led by Dr J.M. Gurt Esparraguera (University of Barcelona) and by Dr S.R. Pidaev (director of the Institute of Fine Arts of the Academy of Sciences of Uzbekistan). The research is conducted also in collaboration with researchers from the University of Salamanca (Dr E. Ariño, Dr A. Sánchez del Corral, Dr J. Angás), the University of Zaragoza (Dr P. Uribe), scholars from the Uzbek Institute of Fine Arts of the Academy of Science of Uzbekistan at Tashkent and of other international archaeological missions working in the area.

The investigation has been performed in different areas of the site: 1) the Tchingiz Tepe fortress, first occupied by the Yuezhi tribes and by a Buddhist monastic complex from the 1st/2nd centuries AD, where a pottery kiln and several dwelling structures have been recovered (Figs. 2, 3); 2) Two pottery kilns in the workshop located outside the Buddhist monastic complex at Kara Tepe attributed to the Kushan and Kushano-Sasanian periods (Fig. 4); 3) The Citadel of Termez, founded in the Hellenistic-Seleucid period and remained inhabited during the nomadic Yuezhi period, the Kushan and the Islamic periods; 3) The alluvial plain, where a settlement associated with the Yuezhi nomadic occupation has been identified, 4) The Islamic city, especially the pottery workshops locates in the shahristan, the rabad (suburbs) and outside the rabad (Fig. 5) (Sánchez del Corral and Thum, 2012; Martínez et al., 2014, 2019a, 2019b; Gurt et al., 2015; Tsantini et al., 2016; Angás et al., 2019). The research program is based on multiple methodological approaches, comprising:

(1) Geomorphological, taphonomic and bio-archaeological studies to determine the specificities of the local geomorphology and palaeoenvironment, thus furthering our understanding of the formation of the archaeological site itself.

(2) Geophysical surveys, supporting the research for the correct location of archaeological sequences and ceramic production centres.

(3) Stratigraphic excavation of the archaeological record, with related topographical and photographic documentation, and data recording and processing, using Archaeological Information Systems and Database Management Programs (Proleg Stratigraf - REHA). Special attention has been given to dwelling areas and pottery production centres from different periods.

(4) Long series of absolute dating by radiocarbon analysis, to contextualize the archaeological materials and the chronological phases of the stratigraphic sequence.

(5) Palaeomagnetic analysis of pottery kilns from different sites and periods to get absolute dating of the pottery productions and the first accurate paleomagnetic signals in Central Asia. This research is being carried out with two specialists: Dr M. Gómez-Paccard of the Department Earth Dynamics and Earth Observation in the CSIC-UCM in Madrid, and Dr E. Beamud Amorós of the Paleomagnetism Laboratory in the CSIC-ICTJA in Barcelona.

The main goal of the archaeological research is to give insights into the context of foundation and the historical evolution of the site, the urban plan and its evolutions along the time, the architectural materials and characteristics, how the inhabitants interacted with the territory and with other contemporary settlements, but it will also provide data on several socio-economic aspects, for a better understanding of the role played by Termez as a cultural and religious, but also trading, centre in a regional frame and in the context of the Silk Road. Besides the analysis of the archaeological stratigraphy and the radiocarbon program, the research also entails a comprehensive study of the pottery produced at the site and the corresponding pottery workshops (Figs. 3, 4, 5) and of the ceramic contexts recovered during the excavations. All the archaeological and chronological data have been progressively published in the IPAEB international reports and in international journals (Gurt et al. 2007, 2008, 2009, 2015; Gurt and Pidaev 2010, 2011; Martínez et al., 2014). 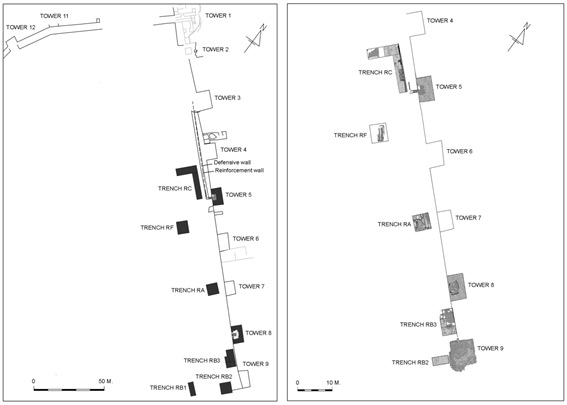 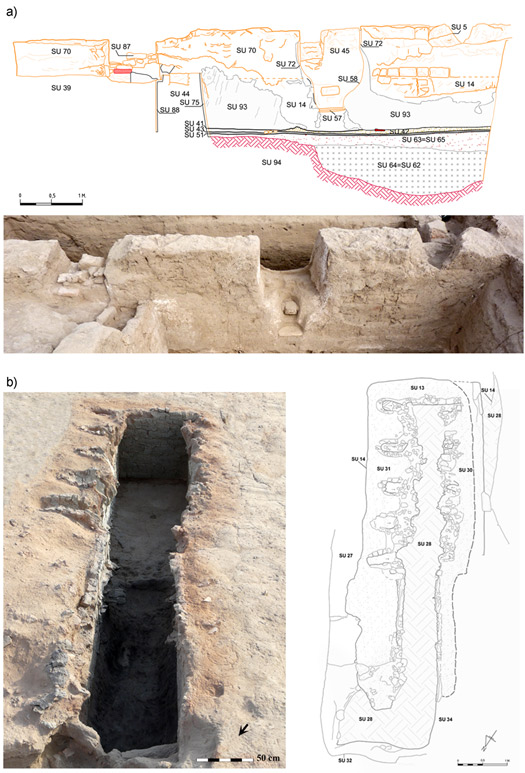 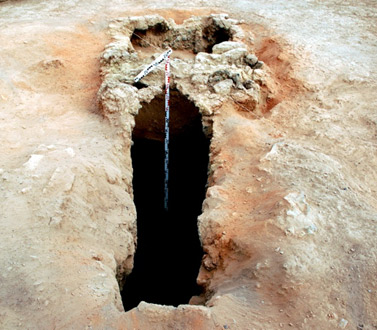 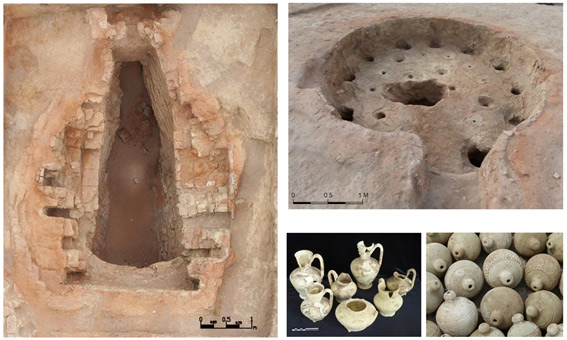